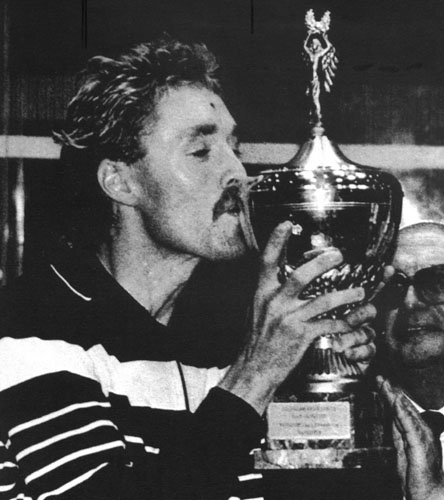 The 1986 World Open champion is one of two athletes who have been inducted into the New Zealand Sports Hall of Fame at the annual Halberg Awards dinner in Auckland. 1982 Commonwealth Games gold medal winning runner Anne Audain has also been inducted.

Norman is the second squash player to receive the honour, behind the legendary Susan Devoy who was inducted in 1993.

Indeed it was Devoy who attracted much of the media attention associated with the sport in the mid 1980s, when Norman upset world number one Jahangir Khan to grab a piece of the limelight for himself. Khan had not been beaten in five and a half years, before the kiwi world number two's 9-5, 9-7, 7-9, 9-1 victory in the final of the World Open in Toulouse. It was the highlight of a sensational year for Norman, who scooped several other titles in 1986 including the French Open, Irish Open, European Open, German Open and of course the New Zealand Open.

Norman also enjoyed immense success on the national scene, capturing his first major title in 1970 when he won the under 13 boy's title at the Junior National Championships. He went on to win the under 15, 17 and 19 titles before transferring his success in the senior ranks with victory in the national champs in 1982, '84 and '85. He represented New Zealand at the World Team Championships no less than six times, never finishing outside the top five, with the best result second place in both 1985 and '87.

Norman now lives in England, but had no hesitation in returning home to accept his induction into the hall of fame. "It is an honour and a privilege to be recognised in this way, and it is truly the icing on the cake as far as my squash career goes. Some incredible athletes have been inducted in the past, and it is humbling to be honoured along side them"

Norman says the award has come as a major surprise "When you are playing sport at the top level, you are aware of the possibility that awards may come your way - but I haven't been competing internationally for some 15 years, so this is a bit of a shock".

Norman retired from the professional circuit in 1994, but has remained active in seniors events. He turned 50 last month, and is planning to contest the over 50s British Open in September. He had hoped to play the World Masters Championships in Christchurch last year, but was ruled out due to a shoulder injury. It was a cruel twist for Norman, who also missed his only other chance to play a World Championship event on home soil in 1983, when he sat out the World Team Championships in Auckland after shattering his leg in a parachuting accident.

Norman is now involved in property development and property maintenance in England, but his squash skills have obviously not diminished too much with age. In November last year, he played a Premier League match for St George's Hill after being called in as a last minute injury replacement. Norman turned back the clock to defeat 21-year-old Jamie Matthews in four, proving he is still capable of beating players in the world's top 200.